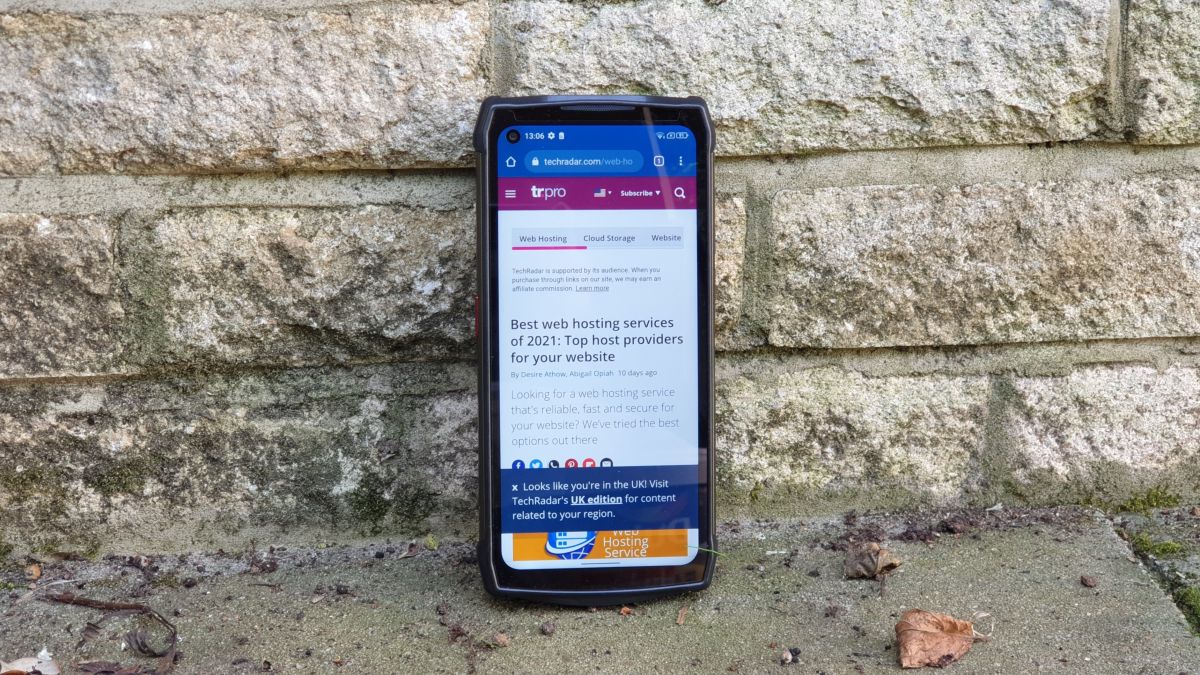 After reviewing the Oukitel WP15, we are lucky to have another big battery rugged smartphone come so fast through our doors. The Ulefone Power Armor 13 may have a smaller battery capacity (13.2 Ah vs. 15 Ah) and be only 4G, but its larger on-board storage coupled with a plethora of accessories, wired / wireless charging fast and reasonably priced put it forward as a compelling product for those who want a mobile device that can last for days.

Ulefone added little features that highlight the level of attention to detail the designers used in producing this exquisite piece of engineering: reverse wireless charging, laser range finder, headset-less FM radio (ideal for outdoors, even without 3G / 4G coverage) as well as an accessory ecosystem. Note that its display is, at almost 7 inches, one of the largest we’ve seen on a rugged smartphone and definitely worth considering if you’re looking for a small one. sturdy tablet replacement with long battery life.

The Ulefone Power Armor 13 is on sale at online Chinese retailer Banggood for $ 297.99. The price does not include (subsidized) postage, local taxes or courier charges. The endoscope costs an additional $ 39.99, which is a fair price for what it is. If you want to buy from China, we advise you to read our 2016 Article “Emptor Warning”.

Much like the Oukitel WP15, the Armor 13 adopted polycarbonate plastic and metal as its basic building materials. The metal frame will help it withstand drops while the thicker frame allows it to cushion drops that could damage its internal components or display.

The 16-megapixel selfie camera is located at the top left of the screen. The latter – which is a massive 6.81-inch 2400 x 1080-pixel IPS display – is surrounded by a raised hard plastic bezel that should protect it from drops. It’s covered with an oleophobic layer, which is a nice feature for those who hate fingerprints.

A POGO connector for accessories, a customizable red button, and the SIM tray are located on the left side of the Armor 13 while a volume rocker, power button, and separate fingerprint sensor are located. the other side. The Type-C connector and a 3.5mm audio jack are hidden by a flap on the bottom edge (remember this is an IP68 / MIL-STD-810G tested device) with a laser on the opposite side.

The Ulefone Power Armor 13 comes with the following hardware:

At the heart of the Power Armor 13 is the Mediatek Helio G95 which is its most powerful 4G chipset; it combines a group of eight arm cores with four Arm Mali-G76 MC4 GPU cores, it is the same chip used in the Doogee S97 Pro and the Realme 8.

Next to it, 8 GB LPDDR4x and 256 GB of integrated UFS storage. Wireless connectivity includes NFC, Wi-Fi 5 as well as Bluetooth 5.0. The 13.2 Ah battery is charged using a 33 W (11 V, 3 A) compact battery and can provide power (5 W) or be charged wirelessly (15 W). It can of course charge other compatible devices using the supplied OTG cable.

The G95 performs better than the 5G capable Dimension 700 found in the WP15 with some of the best PCMark numbers recorded to date for a non-Qualcomm processor (above 10,000 points) with its storage subsystem being its only real weakness. notable. Obviously, this is a capable smartphone that will leave its entry-level rivals in its wake.

Here’s how the Ulefone Power Armor 13 performed in our series of benchmark tests:

Its laser rangefinder worked as expected (it is essentially the same as that of the S97 Pro) and apart from Google’s full range of mobile services (Youtube, Gmail) are the usual Mediatek applications like Security Center (which is more of a utility suite), Children Space and Easy launcher which are basic virtual offices no different from Samsung Knox.

As expected, it comes with Android 11 (with a custom UI) and a set of apps designed for outdoor fans and DIY enthusiasts, typically found on rugged handsets powered by Mediatek: barometer, sound level meter, protractor. , compass and more.

Should I buy the Ulefone Power Armor 13?

You want a big battery

It doesn’t have the biggest battery in town (it’s the Oukitel WP15), but some might prefer the hardware combination offered by the Armor 13 (more storage, higher resolution display, better front camera, and zero charging. wire).

You want something different

With the included laser range finder and an optional endoscope, the Power Armor 13 is a very attractive work phone (as opposed to a business phone) that can do more than just make calls. Do-it-yourselfers and DIY enthusiasts will appreciate it.

You can’t handle a big phone

The Power Armor 13 is a massive smartphone, one of the biggest we’ve seen and it would be understandable if it didn’t appeal to much of the market. Remember you can buy it instead of a 4G Mobile access point and get something much more versatile.

Rugged smartphones released by Ulefone and most of its Chinese rivals are unlikely to receive subsequent updates to the operating system. Likewise, the warranty is patchy at best with returns.