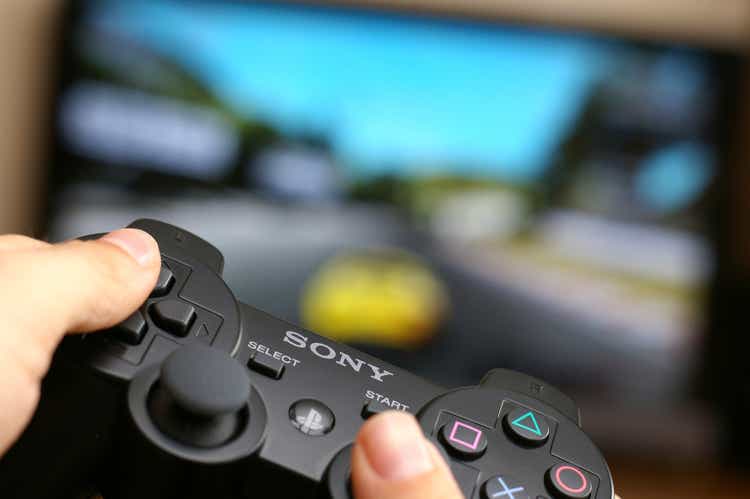 With a forecast P/E over one year NYSE: SONY) the stock looks too attractive to ignore. The stock is down about 40% year-to-date, double the decline of most international stocks, and long-term investors might want to view share price weakness as a buying opportunity, I believe. Personally, I see around 40% upside when calculating a stock price target of $116.67. I anchor my recommendation on a residual earnings framework based on analyst consensus EPS estimates.

A quick overview of the company

Sony is one of the largest electronics companies in the world with a strong portfolio for consumer, professional and industrial markets. The company develops, manufactures and distributes devices such as game hardware and software, televisions, media recorders and players, video cameras, mobile phones and image sensors. In addition, Sony also produces music and video entertainment as well as game applications. That said, Sony operates 7 major segments: Game & Network Services (G&NS) is the largest segment with around 30% of sales, followed by Electronics Products & Services (EP&S) with around 20% of sales, followed by Financial Services, accounting for almost 20%. The rest is the distributed music segment, image segment, imaging and sensing solutions and others, each accounting for approximately or less than 10% of sales. Geographically, Japan is Sony’s largest single market, accounting for over 30% of sales, followed by the United States and Europe with around 25% each.

I’m bullish on Sony because I think the company is well positioned to capture some of the most exciting secular growth trends. If, for example, we consider the metaverse as an evolution of the digital communication system, then Sony has multiple business opportunities in this space: OLED micro-screens, SPAD sensors, gaming, content, VR headset, virtual production tools. That said, while Sony’s metaverse exposure as a leading electronics maker is undisputed, I’m also very positive about the company’s content potential, based on music, film and especially games. The combination of Sony’s Play Station platform, 47.4 million gaming network subscribers and the ability to develop popular entertainment content should, in my view, drive long-term sales growth. To support growth, from 2022 to 2024, Sony plans to invest approximately $18.39 billion in IP/DTC areas.

But investors shouldn’t base Sony’s thesis on any perceived speculation surrounding the Metaverse. Sony is already a solid company with attractive commercial scale and profitability. Over the past 12 months, Sony generated $88.4 billion in revenue and had net income of $7.85 billion, or $6.27 per share. Operating cash was $10.99 billion. The company’s balance sheet is strong and should offer both a merger and acquisition option as well as distributions to shareholders. In the first quarter of 2022, Sony recorded cash and short-term investments of $19.83 billion and total debt of $27.57 billion. Going forward, Sony is expected to increase both revenue and bottom line. According to analyst consensus, available on the Bloomberg Terminal as of July 5, revenues for 2022, 2023 and 2024 are expected to be $80.87, $87.44 billion and $96.08 billion, implying a 2-year CAGR of around 10%. Respectively, the EPS are estimated at $5.41, $5.80 and $6.65.

So, if the analyst consensus is correct on Sony’s business forecast, what might the fair value per share be for the company’s stock? To answer the question, I built a residual income framework and anchor on the following assumptions:

Based on the assumptions above, my calculation returns a benchmark target price for Sony of $116.67/share, implying a material upside of around 40%.

I understand that investors may have different assumptions regarding Sony’s required return and the growth of the terminal business. Thus, I am also attaching a sensitivity table to test different hypotheses. For reference, red cells imply overvaluation relative to the current market price, and green cells imply undervaluation. The risk/reward ratio seems very favorable to me. In fact, all tested combinations imply an advantage!

I think Sony is relatively low risk at current valuation levels. However, investors should watch for the following headwinds that could cause Sony stock to differ materially from my target price: 1) slowing consumer confidence due to higher inflation than wage growth and rising interest rates could cause a temporary slowdown in the number of sales of Sony’s consumer discretionary products; 2) loss of competitive advantage in various business segments such as PCs and smartphones given the acceleration of competition in the industry; 3) higher than expected R&D investments to achieve new product initiatives and/or defend competitive positioning; 4) macroeconomic uncertainty related to monetary policy actions; 5) That said, much of Sony’s stock price volatility is currently driven by investor sentiment toward risk and growth assets. Thus, investors should expect price volatility even if Sony’s business outlook remains unchanged.

In my opinion, Sony stock offers a buying opportunity. I like the company’s slightly understated exposure to the metaverse revolution. Additionally, I see upside potential based on the fundamentals. Anchored to a residual earnings framework based on analyst consensus EPS, I calculate a fair implied stock price of $116.67/share, implying about a 40% upside.

SWOT analysis of the car wash systems market by 2028