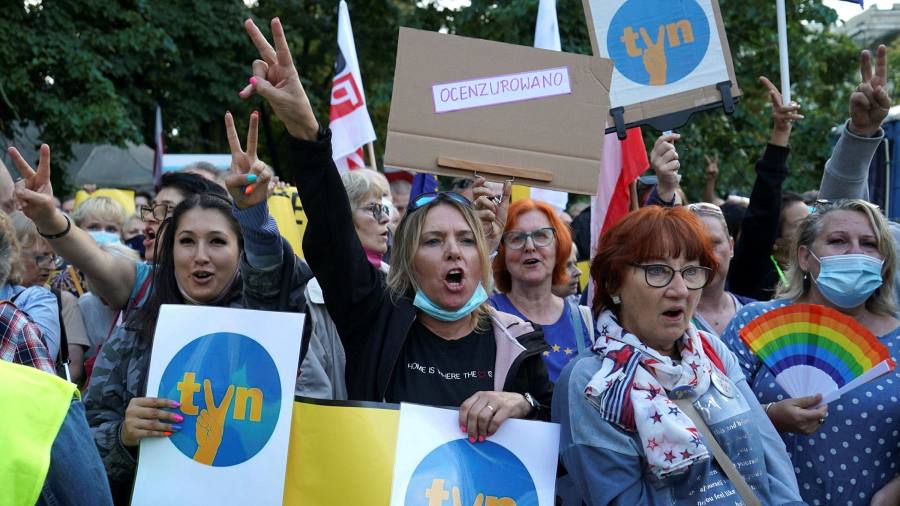 Sign up for myFT Daily Digest to be the first to hear about Polish news.

Poland’s conservative nationalist coalition faces an important test of its viability on Wednesday after the resignation of one of its three parties ahead of the passage of a controversial law that could force an American media conglomerate to sell a controlling stake in the main broadcaster Polish independent.

MEPs are due to vote Wednesday afternoon on a bill that would prevent companies outside the European Economic Area from holding majority stakes in Polish media companies.

The legislation is widely seen as an attack on TVN, a broadcaster owned by the US media conglomerate Discovery and which provides often critical government coverage.

MPs from Law and Justice (PiS), the largest party in the ruling coalition, say changes to Polish media law are needed to prevent companies from undemocratic states from gaining control over media groups Polish.

PiS leader Jaroslaw Kaczynski said on Saturday that Poland must protect itself against the entry of money launderers and “drug companies” into the country’s media sector.

But Accord, one of the two partners in the PiS coalition, opposes the bill. Its leader, Jaroslaw Gowin, said on Monday that the new law would damage Poland’s image, damage its investment climate and “above all, expose us to a completely irrational struggle with our main security guarantor, the United States. United”.

On Tuesday evening, Polish Prime Minister Mateusz Morawiecki announced he would be sacking Gowin, with whom he also argued over planned tax increases. On Wednesday morning, Accord announced that it would be leaving the coalition.

The departure of all 13 members of the Accord would mean that the coalition would lose its parliamentary majority, which until yesterday was only two. PiS officials said on Wednesday they hoped some of the Accord’s MPs would continue to work with the government and said they still had the votes to pass the media bill.

Most opposition parties have said they will vote against the bill. But the PiS expects to garner enough votes from smaller groups, including the far-right Confederation Party, to get it passed.

The bill, which sparked protests in towns and villages across Poland on Tuesday evening, is the latest in a series of measures taken by the PiS that have undermined media freedoms and helped lift the country from 18th in 64th place in the Global Press Freedom Index – below Malawi and Armenia.

Since coming to power in 2015, the PiS has reduced the public broadcaster to a slap in the face, used a state-owned oil group to buy out large numbers of local media outlets, and channeled publicity from state-owned companies to supportive media groups.

It comes amid a broader dismantling of checks and balances under PiS, in which the government sterilized the constitutional court, attempted to purge the Supreme Court and introduced a disciplinary regime for judges that allows them to be punished for the content of their decisions.

The Polish media watchdog has also not issued a decision on the renewal of the broadcasting license of TVN’s main news channel, TVN24, although the request was submitted 18 months ago.

The pressure on TVN, one of the biggest US investments in Poland, has drawn growing criticism from Washington. Last week, a bipartisan group of U.S. senators released a declaration expressing its deep concern at “the continued democratic decline of the Polish government”.

“We are monitoring legislation under consideration in the Polish Parliament which, if adopted and enacted, would discriminate against non-European companies and would likely force a major US investor employing several thousand people to leave Poland,” said they declared.

â€œAny decision to implement these laws could have negative implications for defense, business and trade relations. “