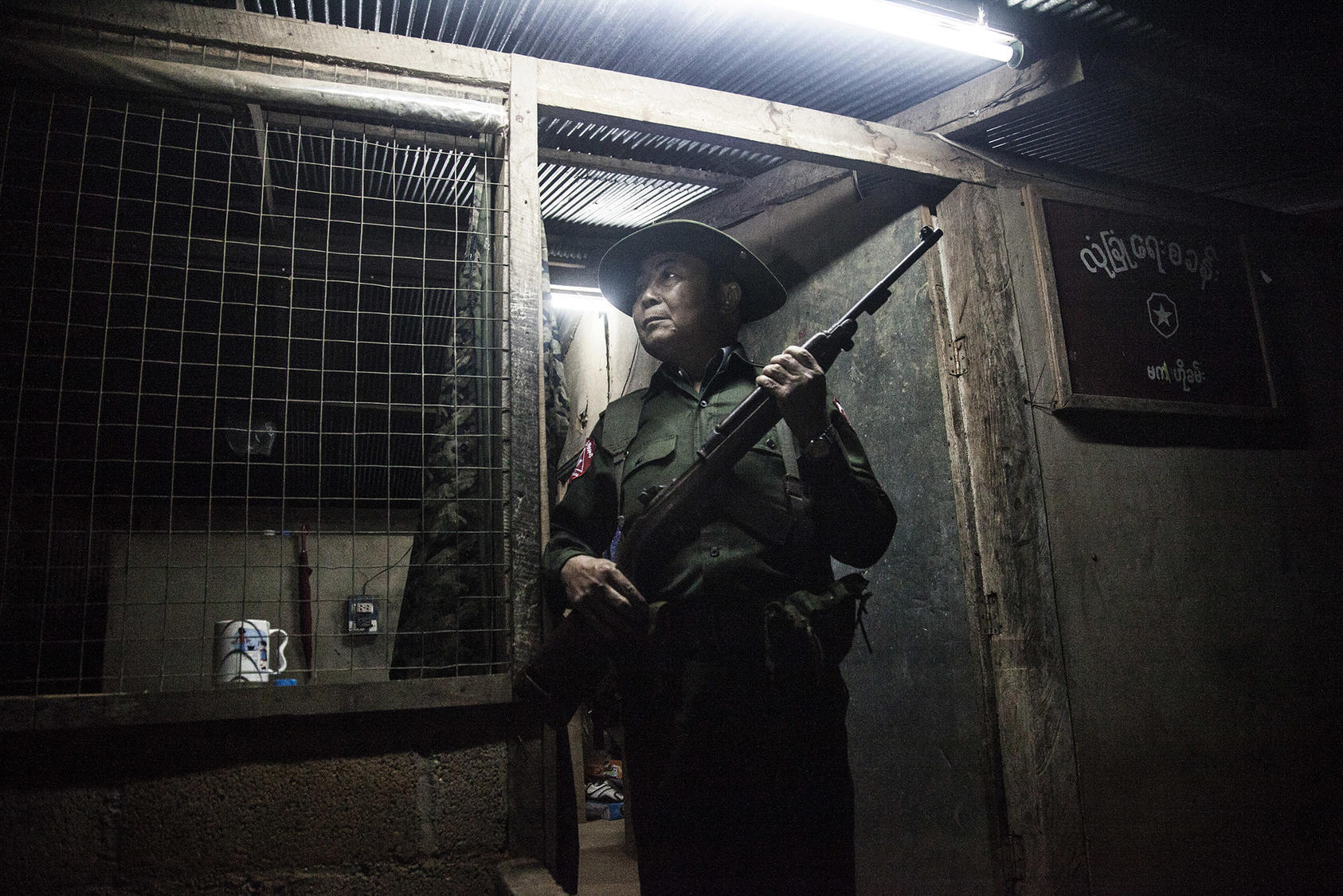 Liu, a central figure in a semi-autonomous area adjacent to China, had certainly provided financial support to the ruling junta, drawing on his ties to the underworld. But his greatest contribution stemmed from a pre-coup initiative: Liu was one of the founders of an army-sponsored border guard force in his home district of Kokang. Today, with Burma’s military leadership rocked by a nationwide armed insurgency, border guards have become a crucial part of military counterinsurgency strategy.

The Border Guard Forces (BGF), militarized units of former ethnic insurgents now under army command, are lined up along the Chinese and Thai borders in areas adjacent to territories controlled by Myanmar’s ethnic armed organizations. Increasingly essential to generals’ plans to suppress the insurgency, BGFs serve as a force multiplier, particularly against major ethnic armed organizations, providing battlefield intelligence, logistical support, and even troops. Additionally, the BGF’s cross-border connections with Thailand and China are helpful in spreading the junta’s propaganda internationally and improving the junta’s relations with its neighbors.

In return for aiding the generals, BGF leaders are given carte blanche to conduct a series of illicit business activities and special access to the military-controlled economy, which has allowed them to establish business conglomerates. businesses across Myanmar. These companies, in turn, contribute funds to aid the coup regime’s efforts to control and influence the population.

Of the BGFs along the Chinese border, the Kokang Border Guard force is the most important to the junta due to its control of the Kokang Special Administrative Zone (Kokang SAZ) – a territory slightly smaller than Rhode Island. which stretches like an arrow in Chinese Yunnan. Province along one of China’s most important trade corridors. Kokang BGF leaders maintain close ties with local Chinese Communist Party officials despite their full integration into the Chinese underworld and heavy involvement in drug trafficking and illegal online gambling.

At the Thai border, the Karen BGF is the main player, controlling a key logistics corridor to Thailand. Since 2016, the Karen BGF has dramatically expanded in size and influence after forming an alliance with a notorious Chinese criminal network to convert its headquarters in a hub for regional criminal activities.

While the BGFs are not as well known as the Ethnic Armed Organizations (EAOs) of Myanmar, understanding their contribution to the coup regime is critical to assessing the junta’s violent campaign to control the country. This article is the first in a three-part series: a later article will look at similar developments in Karen State and a final article will lay out what the United States and other countries could do to curb the growth of transnational crime linked to BGFs.

Most of Myanmar’s BGFs were formed in the late 2000s as part of a military campaign to pacify ethnic armed organizations. The military demanded that the EAOs come under military control, and in return offered the right to develop largely criminal business empires. One of the founders of the Kokang BGF, Liu Zhengxiang (Lee Kyein Chan) is best known as the chairman of the Fully Lightweight Enterprise, a multi-billion dollar business conglomerate and a key player in China’s illegal online gambling market. The company operates large casinos, hotels and industrial-scale online gaming operations in Kokang, karen state and Sihanoukville, Cambodia.

One of four major conglomerates affiliated with Kokang BGF, Fully Light has built a business empire with more than 30 subsidiaries across Myanmar since Kokang BGF was established in 2009. Major investments include two jade mines in the neighboring state of Kachin, including a $1.6 million investment in a jade factory and business operation in China’s Zhenkang County (Ruixiang Trading,Ltd); a coal mine in Sagaing State with an annual production of 52,000 tons; a $10 million cement plant in Kokang; a billion dollars new city project in Mandalay it’s bigger than Washington, DC; a 20 square kilometer sugar cane farm near Lashio; and multiple import-export companies at the heart of the China-Myanmar border trade, including the sugar trade, on which Fully Light has a monopoly.

How did Liu get his coup leader award that overthrew a democratic government last year? According to Chinese media, Liu donated more than 1.85 billion Burmese kyats ($1 million) to conservative Buddhist foundations across Myanmar for the construction of monuments that symbolize the Buddhist nationalism with which the generals seek to identify. Liu’s Fully Light company has also made repeated donations to the junta’s health response to COVID-19, its public works projects and the the advancement of “public administration” following the coup.

While the Liu family appears to have developed the closest ties to the junta’s governing administrative council, the heads of the other three clans (Bai, Wei, and Li) that make up the Kokang SAZ leadership have made similar contributions to the junta.

Beyond funding, the Kokang BGF has helped the regime in multiple ways:

Why are the leaders of Kokang SAZ so attached to the cause of Min Aung Hlaing?

The answer lies in the origins of the Kokang SAZ and the BGF in 2009, when a military operation led by Min Aung Hlaing defeated the Kokang army – the Myanmar National Democratic Alliance Army (MNDAA) – which had refused to become a BGF in 2009. After the battle, four Kokang clans led by former MNDAA deputy commander Bai Suocheng defected to the military side, agreeing to form a new militia under army control in exchange for the Kokang power. Ironically, the Myanmar military justified the 2009 attack on the MNDAA as a way to eliminate narcotics trafficking, but then allowed the new leaders of the Kokang BGF to engage in illicit activities of their choosing.

While Chinese court cases provide ample evidence of rampant narcotics trafficking through Kokang’s SAZ that involves many of the area’s top companies, the mainstay of Kokang’s economy has long been illegal gambling marketed to nationals. Chinese. Many Chinese citizens involved in cross-border gambling have been subjected to Chinese law enforcement, especially after an intensified crackdown started end of 2019. The impact in Myanmar, however, has been to make casino operations owned by Kokang executives only more powerful. These operators include Fully Light casinos belonging to the Liu clan, Hanley casinos belonging to the Wei clan and Baisheng casinos belonging to the clan of Bai Suocheng.

The new casinos of the company Fully Light in Kokang, Sihanoukville, in Cambodia and in the territory of the Karen State controlled by the Karen BGF illustrate this effect. The Chinese crackdown has not stopped these companies from using the Internet, social media and Chinese banking systems. Since the beginning of February 2022, Fully Light’s Casino GoBo East continued to operate online, allowing players to use The Chinese Unipay platformdespite GoBo East’s involvement in the sentencing of several Chinese triad figures of Guizhou and Sha’anxi Province.

In early February, Chinese media exposed an even darker side to the illegal activity, reporting that Kokang and Chinese gangs had jointly created Tik Tok Accounts designed to lure captive Chinese nationals to Kokang. Promised high salaries or the opportunity to marry an attractive Kokang man or woman, hundreds Chinese were tricked into accepting jobs in BGF casino operations in Kokang, only to be held for ransom or sold to Chinese criminal groups in Cambodia.

The activities of the Kokang BGF clans put China in an awkward position.

On the one hand, they partnered with the Chinese government to respond to COVID-19, reopen border trade, and initiate new economic collaboration with Myanmar’s military government after the coup. On the other hand, these same families are the kingpins of a multi-billion dollar criminal network that preys on victims in mainland China. It undermines a nationwide Chinese campaign to crack down on cross-border gambling and fraud and makes a mockery of China’s efforts to protect its nationals overseas.

This raises an important question: despite projecting a tough stance on crime, is the Chinese government turning a blind eye to support the SAC campaign and mobilize resources in its connectivity plans for Myanmar?

What is clear so far is that the Kokang BGF has become a clear beneficiary of the Myanmar military’s continued attack on democracy.

Samsung’s new smartphone has been unveiled

The company raises funds for Ukraine