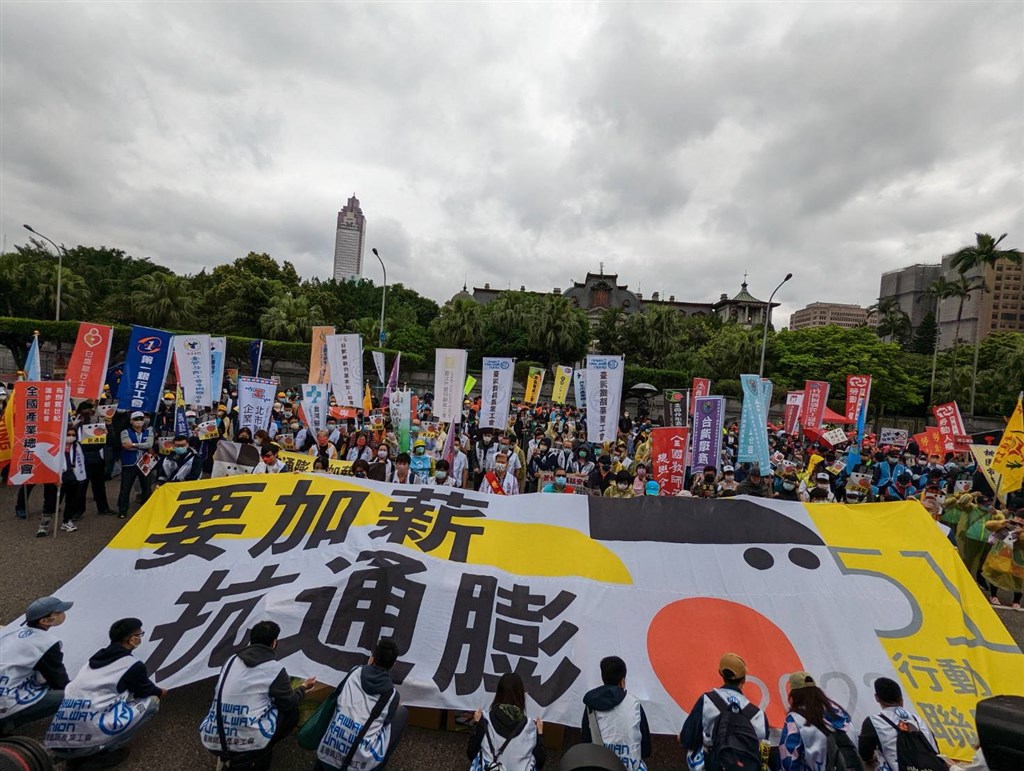 Taipei, May 1 (CNA) Taiwanese workers took to the streets of Taipei on Sunday in an annual Labor Day protest, calling for the enactment of a new minimum wage law and a financial lifeline for the country’s deficit pension program.

Around 1,000 protesters from groups such as the Taiwan Labor Front (TLF) gathered on Ketagalan Boulevard in front of the presidential office building, having decided in advance not to hold a follow-up march due to related concerns. to COVID-19.

In a press release, the TLF called on President Tsai Ing-wen (蔡英文) to follow through on her 2016 campaign promise to enact a minimum wage law to help address Taiwan’s longstanding low wage problem. .

The legislation, the group says, would be a more “transparent and reasonable” alternative to the current system, in which minimum wage adjustments are proposed by a special committee under the Ministry of Labor (MOL).

The government, the group said, should also update laws protecting job seekers to reflect changes in the modern job market, and promote and strictly enforce the Insurance and Disability Protection Act. accidents at work, which came into force on Sunday.

The TLF also urged the government and opposition parties to bolster the Labor Insurance Fund – Taiwan’s main pension system for retirees – which is set to collapse in 2028 without government intervention.

Finally, the group said, the legislature should pass a workers’ education law, establishing a system to educate workers about their rights and protections under the law.

In response, the Department of Labor said it had recently submitted a minimum wage bill to Cabinet for consideration.

Even without the legislation, the Labor Department’s Minimum Wage Review Committee has increased the minimum monthly wage by 26.2% and the minimum hourly wage by more than 40% since 2016, the ministry said.

The Department of Labor also pledged to continue to seek ways to ensure the long-term stability of the EI system, but cautioned that any major reform would need the consensus of society.

Meanwhile, Taiwan Railway Administration (TRA) drivers, who staged a one-day strike on Sunday to protest plans to turn the TRA into a state-owned company, came together to stage a demonstration at the Chiang Kai-shek Memorial in Taipei.

After their protest, the 100 or so TRA workers laid white roses in memory of victims of past rail accidents, then walked to join the largest workers’ demonstration on Ketagalan Boulevard.