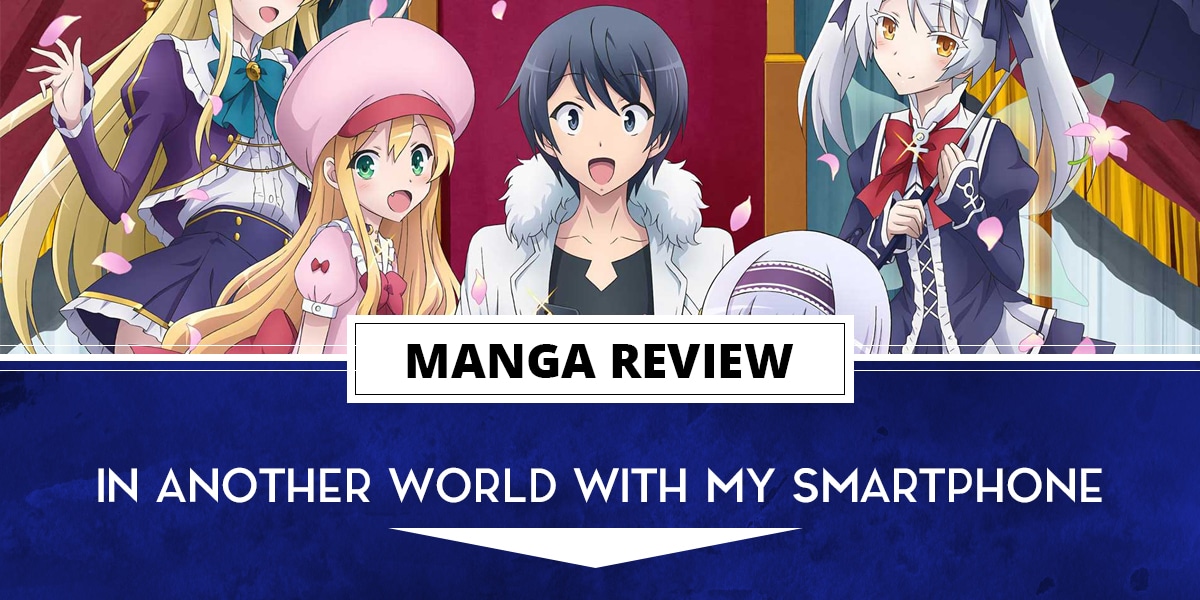 In another world with my smartphone Vol. 4

The fourth volume of In another world with my smartphone sees Touya being rewarded with a title of nobility which he refuses, unsurprisingly. Rather than taking the title, he is given a generous amount of gold coins as well as a mansion to live in. The mansion was clearly meant for himself and Yumiya; however, Touya wants everyone to stay with him, adding another layer to his perfect harem!

They realize the house is just too big to maintain, so a few calls later and they suddenly find themselves with a butler, two maids, a gardener, a cook, and two guards! Just as this whirlwind of life changing begins to subside, Sue and Duke Ortlinde arrive to welcome them to the neighborhood! However, instead of bringing a peach cobbler as a welcome gift, they end up asking Touya for a favor.

They have entered into a partnership with the neighboring country of Mismede and it is customary for the two sovereigns to meet. To avoid any attack, opposition or anything else, they want to use the Touya’s Gate spell to get the king there safely, but in order for Touya to use Gate, he must first have visited the place where he teleports so… that means we’re on a trip to Mismede and I’ll leave it at that for you to find out how the trip progresses as it takes up the entire back half of the manga.

I will say one thing, however. Touya even gets something high-ranking to kneel in front of him, which earned me a pretty good laugh!

Tons of new characters have been added to this volume. There is Rime who is their new butler, a former servant of the king himself, Lapis and Cecil, their new servants, Hulio the gardener and his wife Claire who is the cook, Thomas and Hawk who will guard the mansion, as well as Garn and Lyon… those who will guard Touya and the others on their journey to Mismede.

We don’t really spend a lot of time with a lot of these new characters; however, Rime seems like your typical respectful and loyal butler. Garn and Lyon are both friendly but have their own nuances about them. Garn is more like the friendly but tough guard you can rely on to back you up in a fight while Lyon is more of a noble fighter who will do his duty no matter what…plus he has a crush on Olga!

Since Garn and Lyon are on this journey, I’m sure we’ll spend more time with them in the next volume, but Lyon got the most attention as this little side story with his crush on Olga takes center stage. in this volume.

Touya, on the other hand, still plays the role of the noble leader of the harem. Unlike the other protagonists of the harem, he is fully aware that everyone is in love with him. Heck, they constantly remind him of that on a daily basis! Touya is just too pure for his own good as he resists temptation at every turn despite knowing all of their goals. I feel like he has to be like that or his whole group would descend into love-soaked chaos! Also, I feel like he will end up choosing one of them at some point and I can see that as a way for him to relax in this possible decision.

This volume felt a bit like filler but a good filler. It was like Touya refusing a noble title only to end up being generously rewarded anyway. Our cast has grown by leaps and bounds, but a lot of them seem like one-off characters or ones that will be kept on the back burner until they’re actually needed, but that’s okay. Every story needs a supporting cast and with most supporting characters accompanying the main character all the time, minor characters such as these are needed.

It only looks like Garn and Lyon will have some sort of bigger role… at least for this trip to the Mismede arc. I expect them to leave at the end only to conveniently return later in the story when Touya is in trouble. Characters like these seem to have been built for this kind of role.

Although the plot hasn’t advanced much, we have a focus for this next arc and we happened to have some good action mixed in towards the end to help spice up this volume a bit. Also, we used the smartphone gimmick in this series! For a series based on a guy who travels to another world with his smartphone, that’s not really used, but this volume showed why. The smartphone is super powerful! You will understand what I mean by reading it!

I can’t wait to see the rest of the journey to Mismede and the possible plot twist when the two kings come together to meet. Come on… You really expect this meeting to go smoothly!? Let’s see what happens! (Before I do my next review where I have to say nothing happened.)

You can also check out other The Outerhaven reviews on your favorite social media:

This article was provided for review by Yen Press