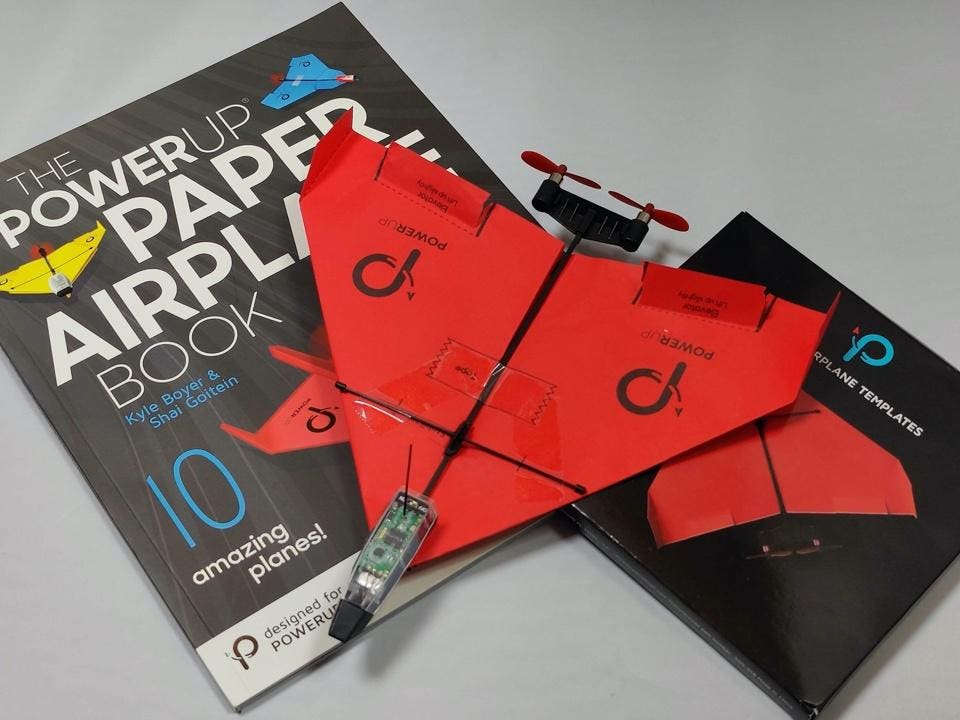 It’s an engine for your paper plane.

Let’s face it, there are some products that are really easy to explain, and Power onThe PowerUp 4.0 holder is one of them. Using your smartphone to control a drone isn’t a new idea, but taking it out of the realm of expensive hovering quadcopters and applying it to one of the great DIY toys for kids? Yes, I am all for it.

Although it is not the same price as your DJI drones, the list price is £ 70 here in UK, or $ 80 on the US website will make you stop and think about what you are getting. The main motor is a double-bladed “pusher” at one end of a plastic keel, while at the front you’ll find a rubber tip (for safety) next to a small structure similar to a cockpit which includes the rechargeable battery, Bluetooth connectivity and all the sensors necessary for flight. That’s a lot of technology for the price.

Let’s put all the tech aside, because it doesn’t matter if you’re not going to have fun.

Good news … the Power Up paper airplane is a lot of fun to fly! There is something joyfully dizzying about tossing my newly folded plane into the air like I once did. Then, in my mind, the paper would peel off, hover in the air, fly around the park and come back to me. If I was lucky it would obey all the laws of physics and glide smoothly across the floor, looping and turning depending on how I had defined the surfaces.

Most of the time, they were flying a bit off balance and quickly creating their own unexpected ground interface moment.

Now… after this toss my plane doesn’t dive down, it goes up in the sky under my control. This loop can occur; or a fast dive and a low speed run just above the ground; a carefully controlled circuit around the park; a punctual landing at my feet; all this and more is possible.

One of the big questions around the PowerUp system, is it easy to control? The short answer is yes, but it’s not something you can do right out of the box (or out of the paper next to the printer). There is a short series of YouTube videos not only on keeping your plane, but also on safety procedures and considerations; not just making sure you’re in a big space, but thinking about wind, bluetooth range, and what you’re going to do if something happens.

That idea of ​​“thinking ahead” that you have when you drive? It’s the same principle here.

Control of your plane is via an app that connects to engines and sensors via Bluetooth (which itself limits range; when your plane moves out of range, it lands in a straight line). Since you only have twin motors in the plane, you’ll tilt your phone left and right to rotate the plane, and by swiping your thumb up or down the screen, you will be able to speed up the engines to go up and down.

The tricky part for me was having to throw the plane with my non-dominant hand, while the other held the phone preparing to take control.

The on-board computer handles all the balancing of the aero controls, making this version of the Power system relatively forgiving for your folding skills. It also means that less conventional shapes and materials can take to the air. You might not fit a barn door, but a model barn door? No problem.

One of the other questions you will need to answer is which plane to fold. When you open the package you have pre-printed paper that will allow you to fold entry-level models – the entry level means you are looking at an airplane that is inherently stable and relatively slow in flight, which makes it easier to control and understand.

The team behind PowerUp has a number of folding guides on their Youtube channel, as well as pre-printed template packs and their “Paper Airplane” book that guides you through folding a few tested models on blank paper; as well as evaluating models for handling, speed and endurance. You will also find on sale your spare parts to help you after “these” moments; although even after a few weekends of flying everything is still (touch wood) intact.

There is romance on the fly, and PowerUp puts it in your smartphone with something tangible and almost magical. Remote control planes have been around for a long time, but they always seemed out of reach; expensive, fragile, and how to learn to fly one when your first flight must end with a successful landing.

The PowerUp system responds to all of this. It is an investment, but not a huge one; it’s a fairly robust system and most of the damage in my experience is limited to the paper (and you have spares both in the box and available at a reasonable price); and this first flight can fortunately end with a heavy bump on the ground.

I don’t think there is a happy medium on this one. Either you don’t see the appeal or you’ve been sold to ‘this is an engine for your paper plane’.

(SONY), Microsoft Corporation (NASDAQ: MSFT) – You May Have a Different Profile Picture in Every Discord: Why Change Matters to NFT’s Growth